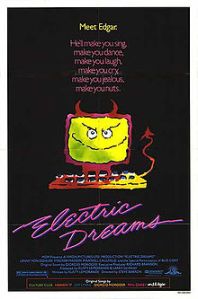 For all you youngsters out there (those below the age of fifty) permit me to supply a primer on what life was like Before The Internet –before, in fact, the dissemination of the very PC itself!

I know, it seems fake and blasphemous that there ever was such a time.  But let me assure you, not only were there no PCs, there were not even hand-held calculators, video cameras the size of a mouse, or X-Box.  It was a grim period indeed.

Before the PC (I’ll mark its evolution as 1984, since that’s when Ridley Scott directed that really cool Apple commercial and Orwell predicted we’d all be slaves to futuristic HDTVs).  In that Magical Year, Apple unveiled the Machine For The Rest Of Us:  the Mac.  I took one look at this beige box with the smiling face, loaded with its 128k of memory; lacking something we call a “hard drive” and employing what was known as “floppy disks,” and I said to myself:  I’ve got to have one!

Prior to this, I’d made due with the Apple IIe, where you’d use a Z80 card and WordStar to accomplish something that resembled writing, but you had to embed formatting into the text.( ^PB for bold, anyone?).  WYSIWYG?  What?!

For writers, even this was better than our B.P.C. tools:  antediluvian devices known as “pen and paper”, and a machine called a typewriter which, miracle of miracles, could correct its own mistakes! (I’m talking the IBM Selectric II here).  There were even older typewriters which required no discernable source of power!  Undoubtedly, they were brought to earth by ancient aliens.

B.P.C., revising your work was a bitch.  We had none of this Spell Check crap, Cut and Paste, or Delete. We earned our 2 cents a word, people!

Back in this pre-Colombian age, you had to know how to add, since there wasn’t an Excel yet.  You couldn’t really centralize information, since databases were something that belonged to punch cards or ahead-of-their-time geeks who had funny haircuts but went on to become richer than you.

Yet all of this pales compared to the true Dark Ages:  the pre-Internet Paleozoic.  Imagine a time, youngsters, when you would have to call your friends, not just send them a text or email!  When the US Post Office was not in its present tottering state, since actual letters (involving paper & envelopes) were used, affixed with actual stamps!  If you wanted to meet up with someone, you had no choice — you had to go for the phone!  And not a Smart one, no:  one with a rotary dial, not all gussied-up with apps and GPS and games.  What’s more, it often hung on a wall!!

Research was accomplished by going to a place called a “library.”  There, something called physical books resided, and you would actually have to find them amidst a riot of sagging shelves!  Crazy huh?

Photos were taken on film (and yes I was around before color photos), developed, then assembled into scrapbooks (and not like the ones on Pinterest, either).

To keep up with friends from high school, you didn’t have a Classmates.com or Facebook.  You had to know somebody who knew somebody who knew that little Mikey Glickman was now a powerhouse realtor with listings all over the Valley.  Too bad he ended up bankrupt.

In the event of an earthquake (I live in L.A.), you didn’t bring up CNN on your iPad.  You ran into the street and yelled, “Jesus, that must have been a 6!” since your windows were shaking and Dad had taken the trouble to usher you downstairs.

If you had something pithy to say, you didn’t grab your phone and Tweet.  You spoke it, in words, before other live human beings who would either laugh or not, depending on their level of politeness.  It was like theatre versus writing the play.

You had the need to buy something?  You got your ass in your car (or Mom’s car) and drove to the store.

You wanted to get some exercise?  You walked out the door and played with the kids in the street.  None of this “I’m pretending to be Luke fighting Darth Vader” crap on this new-fangled XBOX Kinect!

You had an itch to see naked women?  Pick up a goddamn Playboy.  You wanted to see naked men?  OK, that was a little bit trickier. You missed being scammed?  Talk to a telemarketer – they were just as good as phishers.

In essence, all things were possible in the B.P.C. world:  it was just more inconvenient, and you had to talk to people.  But we did manage to soldier on without Google, Facebook, and Apple.  Do I long for this simpler time?  Cry over my old Bic ballpoint?  Hell no!  My business is software and I use virtually every major site to stay connected and get information.

But it is nice to know that, in the event of a Mayan Meltdown, I have the proto-knowledge to live a life free from AC or batteries.  While you Millennials are crying over your iPhones, I will be stealing your food and writing my post-Apocalyptic journal with nothing more than a pen.  I will be your Katniss Everdeen, with my mind serving as bow.

I am the dinosaur who will inherit the earth.