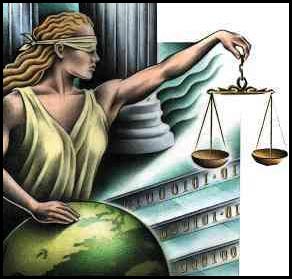 I’ve been thinking lately about the Greed that oozes down Wall Street and the Too Big To Fails: you know, the folks who make million-dollar bonuses and wrecked the U.S. economy by bundling toxic loans and selling them to Muppets –uh, investors.

Now, when a member of the 99% (that’s you or me) commits a crime, we are generally punished.  If you’re African-American, you’re punished at a ratio of 3.5; if you’re Latino, nearly 1.5.  Whites are a straight 1:1. Roughly translated, this means that relative to their population, blacks and Latinos get the short end of the stick – from their jailers.

On Wall Street, where “Greed Is Good” and everyone is too smart for their own good, criminality has not only been legalized but lauded.  Manipulate the silver market and plunge S&L’s into crisis?  Great job!  Come up with the concept of “junk bonds” which proves as trashy as its appellation, and you’re a billionaire who builds schools with your name on them. OK, so you might do some time at Club Fed, and not be allowed to wear your toupee, but that’s a small price to pay for Livin’ Like A Rock Star, right?

These days, the short  stint behind bars has become déclassé (unless you’re Bernie, and then they have to put you away).   Kerry Killinger, erstwhile CEO of Washington Mutual, received a $24 million bonus the year the bank failed (the biggest one in US history, but who’s counting?).   Angelo Mozilo, the Mob-like boss of Countrywide, settled with the SEC for $67.5 million on charges of insider trading and fraud – fraud so pernicious that it made WaMu’s stinking loans smell laundry-fresh.

John Thain, the Last Emperor of Merrill  before it was annexed to B of A, was removed by Ken Lewis (soon to be beheaded himself) for granting huge executive bonuses just before Merrill fell.  Oh, and he also redecorated his office to the tune of $1.2 million while his firm was going down by the head.  But  everyone needs an $18,000 George IV desk, don’t you think?  He has been punished by becoming head of CIT Group (not be confused with Citigroup), the latter of which is still around thanks to Uncle Obama.   BTW, Lewis “retired” from B of A in 2009 with pension benefits totaling $53 million.  I hope that’s enough to get him through.  If not, he can always buy B of A stock  – hoping it rises from $9.00.  Maybe he can just buy the Board of Directors a nice bottle of Chevas.

You’ve probably heard about Dick Fuld, The Tool Who Started It All, whose compensation from Lehman before his dismissal was said to be $500 million (from no less than authority than Congressman Henry Waxman).  A company lawyer swears that this Brobdingnagian sum was understated by some $200 million. [1]   After all, what’s a few mil between friends?

The ex-head of AIG, Maurice Greenberg, is actually suing the U.S. for $25 billion since he feels that the initial bailout ($182 billion) wasn’t big enough.  You know, I don’t feel I’m compensated enough at work. Maybe the Feds can set aside a paltry million or two so I can buy a George IV desk.  To end with a nuclear bang, Bernie M. is thought to have perpetrated his  Ponzi scheme for forty years before a whistleblower finally made himself heard by the SEC.  As long as those investors were “making” money, it was a Great Big Beautiful Tomorrow. . .

Here in my state, California, we have a Three Strikes Law which puts a person away for life if their third “strike” happens to be stealing a pizza (thankfully, this  sentence was later commuted to six years by a judge with a heart where Dick Cheney’s ought to be).  My friend Anthony has been pulled over by the LAPD for “driving while Latino” and I think we’re all acquainted with Rodney King.   In the L.A. Rampart scandal, a cop admitted to shooting a black gang member, then placing a gun in his hands to “stage” the scene.   Not sure if that was before or after the cop’s theft of a cache of cocaine. On a white-collar note, If I’d stolen millions from my vanished ex-employer, WaMu, I’d be playing backgammon with Bernie right now.  And we’d be having a laugh over all those idiot “Muppets.”

My point, Dear Reader, is that the Masters of this Recession, whose financial machinations bore the stamp of 33rd Degree Masons, who have plunged a fair portion of the populace into poverty, hunger, misery, and foreclosure, are still out there, enjoying the fruits of their greed.  Not a one has gone to prison.  They are all still multi-millionaires and more.   In the Old White Boys Club, they either go through the turnstile to another lucrative job, or retire among Bond girls and yachts.   The drooling avarice of Kerry Killinger and his lieutenant, Steve Rotella, personally cost me a ten-year career, my house, my credit, my car, and my health.   Yet those two are unscathed – along with all the others – doing The Happy Dance  while families sleep in their van and use the bathroom at Wal-Mart.

Truth, Justice, and The American Way – and the way of America is that if you’re rich, you have your own justice and your own truth.  Even if it completely conflicts with reality.  And destroys countless lives.  Emile Zola was right, when he has the artist Claude Lantier comment at the end of Savage Paris, “What scum respectable people are!”  Indeed.