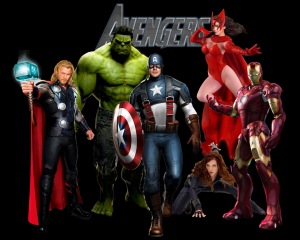 Saw the new 3D Avengers along with my 17-year-old daughter, and though neither of us is a comic book fan we found ourselves – begrudgingly – really enjoying the movie.  Of course, we are not alone:  this mega-franchise tent-pole has already grossed over $700 million worldwide, with $200.7 million domestic from opening weekend alone (setting a new record, natch).  Disney has already announced the development of a sequel, as any sane studio would.

Now, commercial clout is not the gold standard when it comes to quality (think Titanic and its dreadful script; the even more dreadful Twilight Franchise (though I liked Catherine Hardwicke’s take on the first one).  The real surprise of Avengers is how good the film actually is.  Joss Whedon has pulled off the seeming impossible, taking a confabulation of characters, some of whom already had their own “prequels,” and meshing them together in a film that has a coherent plot, a good script, snappy dialogue, and something we’ve lost for about the past 20 years:  character.

The “spine”, as William Goldman would say, is not the flashy effects, though they rival anything in recent CG history, including the execrable Transformers.  Kudos to ILM, Weta , Scanline VFX, Hydraulx, Fuel,, Evil Eye Pictures, Luma, Cantina Creative, Trixter, Modus FX, Whiskytree, Digital Domain, The Third Floor (previs and postvis), and Method Design ( for the killer 3D titles).  Janek Sirrs, who supervised VFX on Ironman, did an amazing job wrangling every FX house in Hollywood and beyond.  The final battle in New York uses 3D as more than a gimmick, especially with those Chitauri cruising through a wormhole on their sky-Skidoos.

However, none of this would matter a damn (see:  the first three Star Wars) if the characters were weak and/or interchangeable.   All of the actors involved do a superb job evoking their particular superhero, especially Robert Downey Jr. as Ironman.  This guy is so lithe you almost want to see him dance Fosse.  He makes an obnoxious, self-absorbed billionaire someone you actually care about.  He’s so good I could even stand Gwyneth Paltrow for the first time this century.

Chris Pine is wonderful as Captain America, and may have the best line in the film (regarding Norse god Loki):  “There’s only one God, ma’am, and he doesn’t dress like that.”  He absolutely captures a 40’s sensibility without belaboring the fact that he’s been on ice for 70 years.  The fish out of water broadness was apparently reserved for Dark Shadows, whose trailer makes it look cringeworthy.

Chris Helmsley hits just the right tone as the imperious Thor, and has the biceps to convince us he can hurl that hammer across worlds.  Mark Ruffalo is delightfully understated as Dr. Bruce Banner/The Hulk, making his transformation into a raging green monster that much more striking.  Watching him and Downey verbally spar over Tesseracts is one of the highlights of the film.

The auxiliary Avengers, Black Widow and Hawkeye, are perfect in rounding out the group.  Scarlett Johansson is dead-on as Russian spy Natasha Romanov, even speaking a mean Russian when we first meet her.  She kicks ass and takes no prisoners with the same aplomb as the guys.  Jeremy Renner is great as the initially brainwashed Hawkeye and he shoots every arrow like his life depends on it.  Augmenting the core is a sinister Samuel L. Jackson as Nick Fury, a comical Clark Gregg as Agent Coulson, and even the acclaimed Jenny Agutter as a member of the World Council.   The British Tom Hiddleston could not be better as Loki:  Whedon chose his villain well.

What makes this movie stand out is that the Good Guys don’t get along initially.  In fact, they’re so disparate and egotistical that their arguments – and physical brawls – seem much more than trumped-up action beats.  Thor versus Ironman is a hoot, while Downey tells Pine, “Everything about you that’s special came out of a bottle.”  Everyone fears the unleashing of Hulk, which Ruffalo, as Banner, accepts with world-weary sarcasm.  Jackson, who spearheads the revived “Avengers Initiative,” is a slippery ally as he retains secrets of his own.  Johansson as a superspy is eminently believable when she wrests key info from Loki by playing on his arrogance.   The sexual interplay between Downey and Paltrow as Pepper Potts is fun without being a toss-off:  it seems real, not just a feeble nod toward having “a girl” in the picture.

Watching good actors with well-defined characters reciting literate dialogue is something I haven’t experienced since All About Eve (1950).  Unlike the Supermans, Spidermans, and – dare I say it – Batmans, this script doesn’t seem to strain or paint by numbers in reaching its set pieces and climax.  The final image (and I won’t give away any spoilers) is downright brilliant.  Someone, probably Whedon, actually sat down and thought about its impact.   It’s a nice finish to an excellent film.

Don’t get me wrong:  I’m not going to pretend that Avengers is Citizen Kane or Sunset Blvd.  It’s just that compared to its comic book ilk, it’s a refreshing piece that delivers on all levels.  I thought that X-Men:  Last Stand was intriguing, but the story was an incoherent mess (ironically, Zak Penn, who wrote the story for this one, was the screenwriter on X-Men).   Alas, even James McAvoy, Michael Fassbender, and Jennifer Lawrence – who have all been great in other roles  — couldn’t save that one.

It’s nice to have a summer film, finally, which is more than just huge grosses and provides bonafide entertainment.  Hunger Games was excellent, but its dystopian story is a downer, to say the least.  Avengers is what a summer film should be:  fun, layered, well-written, awesome SPFX, doesn’t take itself too seriously, and leaves you wanting more.  It reminds me of Star Wars – the real one, Episode IV.  Something to infuse life back to the studio film.  Disney, you are hereby forgiven for John Carter.